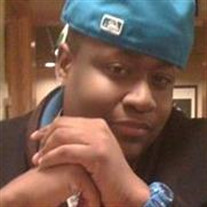 Mr. Brian M. Brown, 31, passed away Thursday, September 29, 2016. Funeral services will be held Saturday, October 8, 1:00 p.m., Riddick Chapel M.B. Church, Bethel N.C. Family will receive friends one hour prior to the service. Burial in Pinelawn Cemetery. Brian was the son of the late Gloristine Brown and Ray Von Kluttz. He was the grandson of the late Judge Lee Brown and Helen Hopkins Brown and the late Horace and Elva Kluttz were his paternal grandparents. Brian was born on May 27, 1985 in Alexandria, VA. Growing up, he first lived in Arlington and then later, his mother moved back to Alexandria where he spent his teen years. He graduated from Mount Vernon High School in 2004. As a child, when he would come and spend the summers with us, he also looked forward to going and staying with his auntie Ruth and uncle Dan and riding in their “big red truck”. After graduating, Brian began working. He worked part time at the Safeway grocery and also part time at the local teen center where he used to go while he was a student in high school. In 2009, he began working full time as a security guard. Earlier in 2016, desiring a change, he began work as an in-store sales/customer service representative for one of the local Sprint Mobile retail stores. Both his manager and the owner considered him to be one of their best as an employee. Brian was active in his church. He was a member of the Woodlawn Faith United Methodist Church in Alexandria, VA. He served as a worship leader, sung in both the men’s choir and mass choir and was a part of Souls4Real. He leaves behind to cherish his memory, his sister, Leslie Veronica Brown of Durham, NC; a brother, Kenneth Robinson of Gastonia, NC. His aunts, uncles, great aunts and great uncles, other relatives and a host of dear friends. Also left to cherish his memory are his girlfriend, his love, Aisha Smallwood and her daughter, Brooklyn Armstrong whom he loved as his own. What Aisha would like for people to know and remember about Brian was that his smile was contagious, he had the ability to uplift anyone and what a great father he was to Brooklyn. Brian was a loving son, grandson, brother, nephew and friend. He had a loving and a giving heart … and he loved the Lord. The family will receive friends at 4492 Hollowell Rd. Bethel, NC

The family of Mr. Brian Mitchell Brown created this Life Tributes page to make it easy to share your memories.

Send flowers to the Brown family.