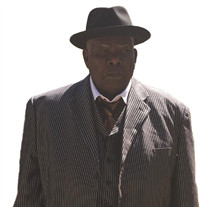 Mr. Elijah Roach, 83, passed away Saturday, May 20, 2017 surrounded by his loving family. Funeral services will be held 1:00 p.m., Saturday, May 27, 2017 at W.E. Flanagan Memorial Chapel. Burial will follow in Homestead Memorial Gardens. Mr. Elijah "Pig" Roach, was born June 27, 1933 to the late Sarah E. Bynum and Richard Roach, Sr. in Pitt County. PIG met Gloristine Daniels in 1964 and they were married in 1970. She preceded him in dealth in 2013. PIG was a native of Pitt County and resided in Greenville NC, most of his life. He started working for Randolph Construction and Septic Tank in 1959. He worked there until 1993 when he was hired by the Pitt County Landfill. He retired from there in 2010. Along with his wife, he was preceded by two brothers, Cleo Roach and Richard Roach Sr. He leaves precious memories to his children and family; son, Elijah Roach (Judith) of Clarksville, TN; two daughters, Hollow Jordan (Larry) of Greenville, NC and Pamela Harrell (Otis) of Chocowinity, NC; grandchildren, Christi, Jasmine, Tyrell, and Tyquan; great-grandchildren, Chyanne, Takiah, Marijah, Charish, Cameron, Takiyah, Brooklyn and London; one sister, Josephine Swinson of Baltimore, MD; two brothers, Robert Bynum and James Bynum; a favorite cousin, Janie Langley of Greenville, NC; sistersin-law, Joyce Daniels, Dianne Daniels, Dora Daniels and Nancy Daniels all of Greenville, NC; two brothers-in-law, Edward Daniels and Woodrow Daniels of Greenville, NC and a host of nieces, nephews, relatives and friends.

The family of Mr. Elijah "Pig" Roach created this Life Tributes page to make it easy to share your memories.

Send flowers to the Roach family.