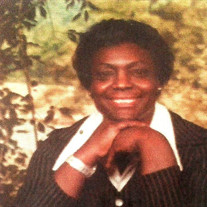 Mrs. Fannie E. Jenkins, 88, passed away Tuesday, October 27, 2015. Funeral services will be conducted Thursday, November 5, 2015, 1:00 p.m. at Burning Bush United Holy Church, Vanceboro, N.C.. Burial in Smith Cemetery, Vanceboro, N.C.. Viewing one hour prior to the service at the church. Mrs. Jenkins was born on April 25, 1927, to the late James and Adeline (Baker) Smith in Norfolk, VA. She departed this life on Tuesday, October 27, 2015. She was the fourth of seven children. She received her formal education through the Norfolk, VA, and North Carolina Public School systems, and was nominated Valedictorian of her high school graduating class. Fannie worked at Prince George’s Hospital in Landover, MD as a CNA; and also completed her LPN Certification. She later received her BS degree in Social Work from Federal City College in Washington, DC. She was employed as a Psychiatric LPN/ Social Worker in several Federal Government hospitals until her retirement in 1989. She also served as a school teacher at Columbia Park Elementary School in Landover, MD. Fannie enjoyed a full life and was full of life—always looking to offer a word of encouragement and extend a hand to whomever she met and wherever she went. She truly enjoyed helping others and spending time with her family. During her spiritual life, she accepted the Savior at a very young age. In 1960, Fannie accepted the Name of Yahweh and Yashua. Later, she became a mother of The Assembly for Worship, located in Landover, MD, where she served as a faithful soldier who truly loved Yashua. The Assembly for Worship, where she was a faithful member, has established a Memorial Scholarship and Outreach Fund in the name of Fannie E. Jenkins. Fannie was preceded in death by her loving husband Joe Nathan, Sr. of more than 34 years at his death in 1983; mother Adeline; father James; beloved siblings: Esther, Stanley, Rosa, Dora, Willie, and her grandson Reuben Carson. She leaves to cherish her memory; 6 children: Barbara Carson (Linwood) of Upper Marlboro, MD; Jeremiah (Sharon) of Bowie, MD; Joe Nathan Jr. of Baltimore, MD; Kenneth of Florence, KY; Pamela Armstrong (Bruce) of Raleigh, NC, and Angela Swann of Upper Marlboro, MD; one sister Mary Allen of Chesapeake, VA; a host of nieces, nephews, grandchildren, great-grandchildren, loving relatives, church family, and friends. Visitation will be held on Thursday, November 5, 2015 at 12:00 noon with service following at 1:00 pm at Burning Bush Holy Church, 280 Bailey Lane, Vanceboro, NC. Interment will follow at the Smith Cemetery in Vanceboro. Repast will be held at Burning Bush Holy Church at conclusion of service.

The family of Mrs. Fannie E. Jenkins created this Life Tributes page to make it easy to share your memories.

Send flowers to the Jenkins family.