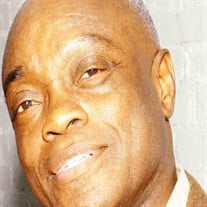 Brooklyn, New York Mr.James Bell, 77, passed away surrounded by his loving family. Funeral services will be held, 12:00 p.m. , W. E. Flanagan Memorial Chapel. The family will receive friends for visitation at 11:00 a.m. at the chapel. Mr. James Bell, 77, of Brooklyn, NY transitioned on April 24th after a valiant battle with cancer. James was born to Mattie Ebron and William Scofield King on June 20, 1944 in Winsdor, North Carolina. Affectionately known as “Bud” to sister, Marie Howard, he was an independent and vibrant personality from the beginning. After graduation from Conetoe High School, James migrated to New York City seeking economic and social opportunity. In 1972 he acquired employment at Harlem Hospital where he held various positions one of which included Union Delegate. After 25 years of service, in 1997, James retired from his supervisor role in Accounts Payable. James’s passion for education could not be understated. A devout student and beloved teacher, he captured every opportunity to indulge in his love of literature. Serving 12 years as a volunteer GED and adult literacy teacher at Brooklyn Public Library, he enthusiastically championed numerous immigrant students in obtaining US citizenship. He later fulfilled his wish of completing his college education. In 2010 James attained a Bachelor of Science in Teaching and Learning from New York University (NYU). Following this achievement he furthered his academic career at Harvard University Extension School, completing 24 credits in learning and teaching. Applying his gift as an impassioned communicator, James entered a second career as an English Language Arts Substitute Teacher with the New York City Public School System. As a connoisseur of music James harnessed his love through dance and entrepreneurship. Owner of a soul food restaurant and night club he captured guest with impeccable style and wit. With a love of showcasing his skills, he could often be found on dance floor. Friend and family alike frequently deemed him a “suave dancer” who captivated an audience with his moves. A Historian in search of his roots, James invested in genealogy to identify and build relationships with relatives near and far. Through this journey’s he discovered a multitude of siblings, nieces, nephews, and cousin whom he developed heartfelt connections with. Left to Mourn: 3 Children- Melanie Becton, Kimberly Bell, and Donald Bell; 8 grandchildren- Tyrice Battle, Jefferey Becton, Jennifer Bell, Erica Bell, and Ronnell Kitchings Jr., Anthony Arevalo, Felicia Bell, and Donte Bell; 4 great grandchildren – Nakyia Bell, Nazier Bell, Korey Battle-Dixon, and Aziel Battle; 1 great-great granddaughter- Nazaria Cuff, and a host of relatives and friends. Services will be Livestream at W. E. Flanagan Memorial Facebook page. Services will be on Zoom at the following link: Meeting ID: 927 232 7995 Passcode: KeYBC3

The family of Mr. James Bell created this Life Tributes page to make it easy to share your memories.

Send flowers to the Bell family.