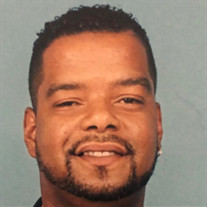 Our family at W. E. Flanagan Memorial Funeral Homes, joins with the Bridges family to inform those concerned that Mr. James Alexander Bridges affectionately known as “Bruh”; formerly of New Bern, permanently changed his address from Earth to Glory on Friday, September 24, 2021 while in CarolinaEast Medical Center in New Bern, NC. Precious moments have been sat aside by his devoted family on Monday, October 4, 2021 between the hours of 12pm and 1pm in the Sanctuary of Northwest “A” Free Will Baptist Tabernacle, Trenton NC. During this time, family and friends can gather to embrace each other as the healing process begins, while reflecting on everlasting memories of Mr. Bridges. Celebration of Life Service will be held at 1pm in the Sanctuary of Northwest “A” Free Will Baptist Tabernacle. Following the order of divine worship, Mr. Bridges delicate temple, along with his cherished family, will be escorted to Flanner White Cemetery in Pollocksville, NC for Interment Rites. James (Bruh) Alexander Bridges III, son of Ms. Joyce Marie Carter and the late James Alexander Bridges Jr. Born on August 18th 1964 in Newark, New Jersey. James (Bruh) graduated from New Bern High School and then served in the United States Navy. After serving in the Navy, he worked as a receiver at fedex in Dundalk, MD. Then moved back home, and went to work for Trent Cadillac as a detailer for many years. He accepted Christ as his Lord and savior, and was a member of St. James AME Zion Church of Rocky Run. He was a faithful doorkeeper, and served as a senior usher until his health failed him. He leaves to cherish his memories his daughters, Jasmine Bridges of the home, Sharlisha Brown of Trenton NC and Crystal Brooks of New Bern NC. Mother, Joyce M. Carter of New Bern NC. Sisters, Venus Gooding of New Bern NC, Alexandria and Tiffany Bridges both of York, PA. Brother, Lee Bridges (Patrice) of South Carolina. Grandchildren, Zaylin M. Drew & Kyla R. Walker both of New Bern NC. Special friends, Reginald James, Rev. Dexter Mattocks, and Clay Hodges all of New Bern NC. A host of aunts, uncles, nieces, nephews, cousins and friends.

The family of Mr. James Alexander “Bruh” Bridges III created this Life Tributes page to make it easy to share your memories.

Send flowers to the Bridges family.