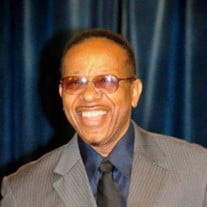 Mr., Joe Denzel Gatling, 77, of Greenville North Carolina, passed away, December 23, 2021. Funeral services will be held 12:00 p.m., Saturday, January 8th, 2022, W. E. Flanagan Memorial Chapel. Viewing one hour prior to the service. Burial in Homestead Memorial Gardens. Joe Denzel Gatling, Sr. was born January 21, 1944 in Bertie County, North Carolina to the late Denzel Gatling and Cleo Holley-Gatling. Joe was the second eldest of 11 children. Joe departed this life on December 23, 2021 at his home in Greenville, North Carolina. As a child, Joe received his formal education in the school system of North Carolina. He then migrated to Philadelphia, Pennsylvania in the early 1960’s as a young adult. At an early age, he accepted Christ as his Lord and Savior at the New Jerusalem Baptist Church under the pastorship of the late Reverend Vass. He continued to be a faithful servant throughout his life. Joe met and married Andrea Winborne in 1966; from this union, two children were born: Joe Denzel Gatling Jr. and Sherena Renee Gatling. In 1981, Joe later married Dorothy Ann Houston and three daughters were born from that union: Crystal Nicole Gatling, Chevon Gatling and Danielle Gatling. Joe began his work career at the Holiday Inn as a custodian. He then transitioned to Drexel University where he worked for several years. Joe later became an employee at the University of Pennsylvania. It was there he worked as a dedicated employee until his retirement in August 2014. Joe’s favorite hobby was playing the guitar. He enjoyed playing at several churches and family functions which lead to him forming the group “The J&J Gospel Singers”. Joe was a social butterfly. He was known for his James Brown moves and doing" three-finger"pushups. Joe was the life of every social gathering. He enjoyed making people laugh. He cherished his guitars and amplifiers. With his martial art skills and ornate canes, he considered himself the “black Bat Masterson”. He loved spending time with his children and grandchildren. Joe had a natural gift of working with his hands and everything he fixed, he did it to perfection. Joe was preceded in death by five brothers: Michael Madison, Jessie Ray, John Henry, James Calvin Sr., and Johnny Alton. He leaves to cherish his special memories: five children: Joe D. Gatling Jr., Sherena R. Gatling, Crystal N. Gatling, Chevon Gatling and Danielle Gatling (Brandon); four grandchildren: Xavier C. Bell, Jayden N. Gatling, A’sata Belle Gatling and Darren R. Coleman; two brothers, Jerry Gatling (Deborah) and Jewel Gatling Sr.(Lena); three sisters: Eva Lois Perry, Mary C. Gatling and Susie Freeman; his beloved aunt: Fannie Mae Epps; and a host of nieces, nephews and cousins, Joe will be greatly missed by not just his family and friends but by all who had the good fortune of being in his presence. Masks are required for attendance at all serviced. COVID-19 social distancing mandates will be enforced. Services will be Livestream on the W.E. Flanagan Memorial Facebook page.

The family of Mr. Joe Denzel Gatling created this Life Tributes page to make it easy to share your memories.

Send flowers to the Gatling family.