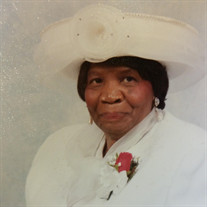 Surrounded by her loving family Mother Peggy Rose Hardy-Hammond, 81, passed away peacefully to be with the Lord, Thursday, December, 21, 2017. Peggy was born on August 2, 1936 in Greenville, NC to the late Gus and Esther Newton Hardy. She is predeceased by two brothers Jimmy Hardy and Larry "Shotgun" Hardy. She was raised in the former "Newtown" section of Greenville. She attended the Fleming Street School, South Greenville School and graduated from C. M. Eppes High School in 1957. She entered into holy matrimony on September 1, 1964 to David S. Hammond Sr. To this union three children were born, Esther Lynette, David S.Jr., and Jill Rochelle. She was employed for over 26 years in Pediatric Nursing Department at Pitt County Memorial Hospital. She was later employed, alongside her husband and daughter in funeral service at Flanagan Funeral Home for over 20 years. At the age of eleven Peggy gave her life to her Lord and savior Jesus Christ, and joined the former Disciples Church under the late Rev. McLaurin, which later became Philippi Church of Christ where she was a dedicated member for over 70 years. Mother Hammond was steadfast in her duties of her beloved church where she served under the late Bishop Randy B. Royal in numerous auxiliaries such as the Junior Choir, Senior Choir, Mass Choir, President of the Mother’s Board, Pastor’s Aide Club, Mission Circle. She also served the Pitt County community as a precinct captain for a number of years and also as a member of the Order of the Eastern Star. Mother Hammond gladly praised the Lord without ceasing, encouraging everyone she met to “TELL THE LORD THANK YOU!” Her favorite past times and love of ALL things beautiful could be seen each spring with her picking just the right blooms for her garden,shopping, collecting antiques, her “what-nots”, hats, decorating for the holidays especially Christmas, and enjoying her children and family. Peggy was the epitome of a loving and supportive wife and mother. Nurturing and loving, yet direct and absolute, she devoted her life to the Lord and her family. Her jovial spirit, stern approach and discerning wisdom have inspired many and she will be forever missed by all who had the honor to know and love her. She leaves to cherish loving memories, her husband of 53 years, Rev. Dr. David S. Hammond Sr., two daughters, Esther L. Hammond, of Greenville, N.C. and Jill Rochelle of Fulton, MD, who provided loving and dedicated care the past six years, one son, David Sherrod Jr. of Huntersville, NC, one granddaughter, Alexandria V. Simone (Jarrett) Fullerton of Greenville, NC, one grandson, Kyle David Hammond of Atlanta, GA, two sisters, Fannie Ruth Ruffin of Takoma Park, MD and Hattie Williams of Greenville, NC, four sister-in-laws, Esther Ree Robbins of Pocomoke City, MD, Margaret Jackson of Waverly, MS, Evelyn Hammond of Greenville, NC, and LaForrest Hammond of Winterville, NC, three brother-in-laws, Rev. Curtis Williams of Greenville, Rev. Henry Hammond of Atlanta, GA, Rev. Kenneth Hammond of Greenville and Rev. Ben Robbins of Pocomoke City, MD, her lifetime dear friend, Barbara Fenner, dedicated caregiver, Josephine Sefa of Burtonsville, MD and a host of nieces, nephews, relatives and friends.

Surrounded by her loving family Mother Peggy Rose Hardy-Hammond, 81, passed away peacefully to be with the Lord, Thursday, December, 21, 2017. Peggy was born on August 2, 1936 in Greenville, NC to the late Gus and Esther Newton Hardy. She... View Obituary & Service Information

The family of Mrs. Peggy Rose Hardy-Hammond created this Life Tributes page to make it easy to share your memories.

Send flowers to the Hardy-Hammond family.