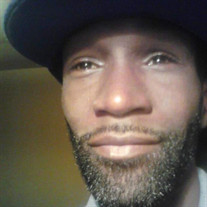 Mr. Sh’quan King, 44, passed away Sunday, November 14, 2021, at the UNC Medical Center, Chapel Hill, NC. Sh’quan King was born on May 7, 1976, to the late Joyce Phillips, in Newark, NJ and on November 14, 2021, was called Home to be with the Lord. Quan attended the Newark Public School System and for a time worked with the City of Newark until an injury prevented him from returning to his position. Though known and loved by many friends, Quan (a.k.a. Smoke or PQ) was “Family First” in all things. He also understood that blood didn’t always make you family, but instead loyalty and commitment. His best friends were his family, Kaseem and Romond. Raised like brothers, they were more than just first cousins, and no matter what, they didn’t let TIME get in the way of their relationship. Quan’s most prized role on this earth was that of “Father.” He loved in action and prided himself on being a good Father whether physically present or through his beautiful letters and calls when he was away. He understood how to parent up close and from a distance, knowing that the heart is never far, and that grace and understanding will always fill in the gap. His son, Samir, is all the young man that he had ever hoped for himself, and his daughters, Shaquana and Serenity are the Princesses that he had hoped to dote on and cherish. They are by far his greatest creations. As a young boy Quan had a gift for restoring things. Self-taught, he could fix anything from electronics to bicycles and later developed a gift of writing poetry. In his latter days he cultivated a way of reframing the world’s ugliness to make you see God’s beauty in it. He understood that we live the consequences of the choices we make. Quan’s laughter was so infectious, it could easily fill up the biggest room, and you would find yourself laughing for no reason at all. His smile so bright that he lit up any space he entered. His voice will be missed. He was a comedienne in his own right and left you with your sides hurting; and these are but a few of many other gifts he has left with us to remember and treasure. Quan was predeceased by his mother, Joyce Phillips. He is survived by his children, Samir, Shaquana and Serenity; sisters, Tanya King and Lois Fayshon Dickens; nephews, Jair and A’Sadon; aunts, Evangelist Pattie Roscoe and Donna Alston; uncle, Judan Muhammad, and a host of cousins and loving friends.

The family of Mr. Sh’quan King created this Life Tributes page to make it easy to share your memories.

Send flowers to the King family.