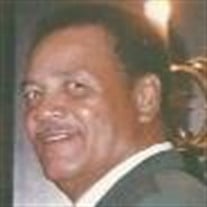 Mr. Walter G. Dillard, passed away peacefully on July 2, 2015. Funeral services will be held 2:00 p.m., Saturday July 11, 2015 at Philippi Church of Christ. Burial and interment at Homestead Memorial Gardens. Viewing will be Friday, 2-5 p.m., at W.E. Flanagan Memorial Chapel. Walter was born on July 20, 1933 in Norfolk, Virginia to John and Ruth Dillard. Walter married Carol Bruce Perkins on April 22, 1966 in Norfolk, Virginia. He was employed as a plant supervisor at Burroughs Wellcome Pharamceuticals for 23 years until his retirement. Walter was known to many people by many names, Tack, Walt, Tank, and Red. He was a man of large stature with a heart to match. He was a loving and devoted husband, a wonderful father and great friend who will be greatly missed but never forgotten. He touched everyone that he met and his memory with live on through them. Walter is survived by his wife and best friend of 49 years, Carol B. (Perkins) Dillard, six children, Deborah L. (Dillard) Lee (Reginald), of Raleigh, NC; Michael L. Boykins of Chicago, IL; Walter Brian Dillard of Greenville, NC, Mitzi O. Dillard of Manassas, Va, Crystal E. Pugh of Greenville, NC, and Edwin H. Dillard, of Raleigh, NC, twelve grandchildren.

The family of Mr. Walter G. Dillard created this Life Tributes page to make it easy to share your memories.

Send flowers to the Dillard family.